Two steps forward and one step back, still gets things done.

It has been a few years since my last post. Since then we have changed our minds on a few things. First and most noticeable will be that after all the shellac testing and talking about keeping it original, in the end, i didn’t like the color combo with my Peachy , Coral colors. So i decided to the dismay of many purists to paint the interior a cream color. Now it will be Peaches and Cream colors on my camper named “Peaches” We have redone a lot of things over the last two years, i will post photos and tell about it as i go along.

The bed in back was also modified after we decided that we wanted the legs to fold up under the top and slide out as i pulled it out. I bought a twin size comfortable memory foam mattress and had it cut down to fit. with the pull out and another piece cut as a bolster for it as the sitting configuration and then as the bed gets pulled out and the legs drop in place and lock, the cushion drops down and makes almost a twin size bed.  I had it covered in the same fabric as the front seat cushions by the same company but i had a cream fabric on the back side so when i sleep it doesn’t get too hot like vinyl would normally do. I will have sheets on it too but this added detail with help out with the comfort level for sleeping but still keep it easy to clean.

The reason that we couldn’t get a whole twin size back there was that i wanted to have room to open the bathroom door.

The Bathroom was another place where we scraped the original idea and made it better. I was originally OK with a portable Loo. But then Frank said he could put in a real bathroom for me and i said that would be great. We had to make some adjustments because the tank couldn’t sit below the floor so it had to sit on the floor. So the toilet sits on top of that.  Still a comfortable height and a much better solution for emptying!

We also put in a little cabinet that we will put a mirror over but decided against another little sink as the sink is right outside the door and its much too small.

The cabinet door has just been painted and is drying. I’ll post finished pictures at the end.

The front Dinette overhead cabinet was a mess and we ended up re making the whole cabinet.

We love this tool for this and and other things. This was a Frank favorite tool.

In this photo you can see the kitchen, the cabinet on the right is smaller because a stove vent used to be hung there and a stove sat below it. As i plan to mostly cook outdoors i decided to put in a bigger fridge instead. I also have a small counter top microwave that my sister bought for me in case of inclement weather and starvation :).  This gave me more counter space and more room for goodies. I lost the cabinet on the other side where the icebox was because i turned the bed sideways to make room for the bathroom.

Here you can see Frank putting in  the small cabinet next to the back bed.

You would be surprised how much you can fit in small spaces in a camper so don’t waste any of it.

The kitchen table was reused and we glued the new top on and put the old trim back on and polished up.

I think at this point before we put the back 1/8 birch panel on we had to finish the electrical and the plumbing. Luckily Frank knows a lot about stuff like this and if he doesn’t he finds someone who does or looks it up and figures it out himself.

Finally the back of the camper got closed up.

Frank came up with a great idea to sand the wood to better fit the curve of the camper but still fit a straight flat window in the proper place.

Trial fitting the window after we replaced the broken glass then cleaned, buffed, re-screened, and added new seals.

I don’t really remember which happened first but i am adding the air conditioner heating unit here. Which has also since been modified and one of the hoses, the output has been moved to a new location lower on the front, i’ll add the info on this unit and the new photo all installed at the end of this reno project.

Before i start putting in the photos of the finishing up of the outside skin and insulation i want to add some interior detail photos here. The front light fixture was originally a propane lamp which we had modified to be electric. The glass fixture is a reproduction sold at Menards.

I was glad this fixture was in good enough shape to re use it.

The Bathroom fixture is a new fixture 🙁

The hallway one is original.

A rare sighting of my baby girl come to visit.

The Insulation came next.

We put in all the insulation, the vapor barrier Installed the side metal and trial fitted the WINGS!

Thanks to Larry at Mobiltec for the idea to make this rig to help with raising the metal to be attached to the sides. Watching his videos has gotten us thru this project. I love his motto ” I make mistakes, so you don’t have to!” 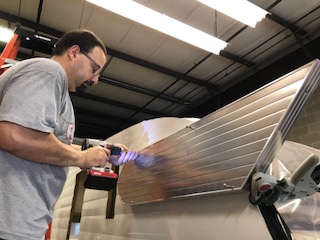 Did i mention that my sister  Sharon gave me my wings? I love that.

Then on to the other side. Frank did some acrobatic moves balancing between the wall and the camper.

Yeah, he is pretty bad ass. 🙂 I forgot to mention that i used this spray adhesive to get the insulation to stick, it made everything stay in place.

It was time to cut the metal, we knew it had to be less than 3/4 of an inch overlap so that the edge would be hidden by the j rail. So we rigged up this marker and wood piece to be the right size line to follow with the tin snips.

Then it was time to cut out all the windows and openings that we needed.

The wheel wells needed to be cut out too, we saved all the metal so we could use pieces as a pattern if we needed and that helped us out in  few situations.

I also wanted to mention that we put metal pieces to protect the wiring and then on the metal we put tape where we knew there was wood behind so we would know where to put the in field screws an so that we wouldn’t screw through wiring or plumbing.

We started to add the roof skin , but the metal wasn’t siting right because i had too much insulation. So we had to remove the vapor barrier from the roof and the front and back and peel away half of the insulation. Let me tell you that is a nasty job, wear a mask and long sleeves and then change your clothes as soon as you get home.

Then after the insulation was removed and the vapor barrier replaced and the skin put back up on there, it sat much better. And i need to mention that we first used only 3 straps across the roof to hold it down while we are working and after we added the 4th one it worked much better. You do whatever you can to avoid buckling the metal.

Francisco lends a hand whenever needed. Thanks!

The second piece that attaches to the front slides into the top piece. We decided to cut out the window so we could clamp it to the sides while working on it. So we slid it into the channel then held it there while Frank traced out the opening. Then we took it to the work table and cut it with a razor and bent it back and forth to get a clean break.

Then we clamped it up so he could staple it and do the edges and the bends around the edges. Using a block to stabilize the metal and a rubber mallet to hit the edge with slowly and methodically he wrapped the edges.

It is here where i will mention the cuts you need to make along the way to make the metal lie flat and not buckle. This is key, especially around the edges.

Today we were lucky, Frank’s wife brought Truffle and Dapper to visit! She also brings us Flavored Ice Tea on hot days. Thank you Deenna for brightening our day!

Copyright © 2014-2020 The Peachy Post All rights reserved.
This site is using the Desk Mess Mirrored theme, v2.3, from BuyNowShop.com.